My how times have changed…. 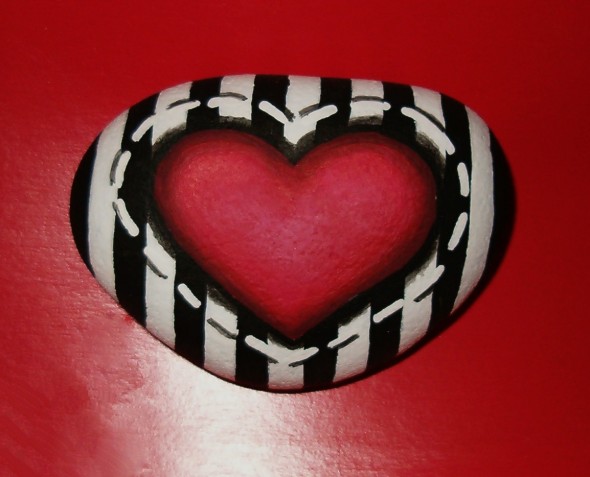 This rock did not sell on ebay when I first started out. It didn’t matter that I loved it. The customers were just not IN to it.

A long time ago – there were a LOT of rock artists that sold their work on ebay. Most of the artwork that sold were animals. People were buying cuddly kittens, cute raccoons and fuzzy bears. The second most popular items were flowers – especially those that looked like they were in baskets. You know, you could put them on your table or in your garden and they would never die (which in reality would be great for me because I seem to kill plants). At times, you would see other items – like Gnome Homes, a Noah’s Ark or holiday-related things. But NEVER would you see anything abstract – or bright and bold. It just wasn’t done!

And it really sucked, because I LOVE abstract, contrast and color. I enjoy making patterns and trying to make my paintings 3D. That is what I really wanted to be doing – but it just would not sell and I needed to make money. Darn it!

When I started painting snakes, it helped because there was pattern, contrast, and texture. And I could make them appear 3D using highlights and shadows. And because snakes are animals, I had success. Yet, I still get tired of them – because they are the same (a rattlesnake is a rattlesnake is a rattlesnake) – and I love to be able to really create something new and different – not the same thing over and over and over again.

It has been with great pleasure that I have seen the trends change. More and more artists now paint abstract, colorful designs. Mandalas are a big hit these days. I tried a mandala – once – didn’t turn out so great (symmetry problems). I tried painting inspirational rocks with words like, “Hope” and “Believe” with patterns around them. Again, not so great – yep, you guessed it – symmetry. Zentangle? Symmetry. Paisleys? Symmetry. I guess you’d say, symmetry is just not my thing.

So I came up with my own style that works for me – and that I love – and that is NOT symmetrical. BUT- it does not sell. Aaargh!…..So I keep painting snakes – and then doing my own stuff on the side, because I love it. And once in awhile, I try to sell it, but it doesn’t sell. Yeah, people say, “Wow – that’s cool!” – but they don’t want to buy it. I get discouraged at times. But then I remember how things have changed over the years – from animals and flowers to mandalas and zentangles – and I have hope that one day, my style will be all the rage, and everyone will want it – and I will become rich and famous, and then there will be articles written about me and I will go on talk shows and…..oh, yeah, okay, so maybe that’s a stretch. But maybe, someday, in the future, someone will actually buy it – and THAT would be awesome.

06 Aug This entry was published on August 6, 2016 at 6:46 pm and is filed under Uncategorized. Bookmark the permalink. Follow any comments here with the RSS feed for this post.

Older: In the beginning….
Newer: Inside, Looking Out