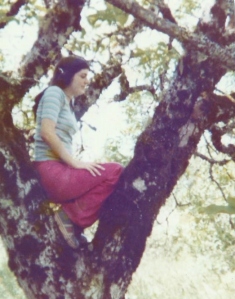 My children roll their eyes when I begin a sentence with the phrase, “When I was a kid…” I believe they are a little bit annoyed with the “Mom as a Child” stories – but I also believe they are a little bit interested. I mean, afterall, things were different back then. My brother and I could walk down to the corner store by ourselves when we were about kindergarten age. Once my brother had a whole dollar he could spend. He chose to buy pixie-sticks – at one cent a piece. I remember how annoyed that store clerk looked as she counted out 100 pixie-sticks. I don’t remember us having many toys – not a single lego, and probably only two Hot Wheel cars. Our toys were balls, hula-hoops, our bikes and sticks. Our TV (black and white) only got about five channels and we had to actually get up and turn the channels by hand (gasp!). And no late night TV watching – the networks actually went off the air each night. I worked in the strawberry fields of Oregon with my brother and sister (and dozens of other school-aged kids). I was ten my first summer. It was hard, dirty, uncomfortable work, but we got paid and THAT was cool! I am sure we only bought candy and soda with our hard-earned money, but we thought we were rich. Soda came in glass bottles back then. One day, my mom bought a couple of six-packs of soda from the local country store (owned by Bud and Fay – who also drove school bus on the side). At home, we got the soda out and my mom gasped and said, “Look at that!!” There in the neck of the bottled orange soda was a huge cockroach! My mom took the soda bottle back to the store to show them the cockroach. They gave my mom a couple of six-packs as an apology. Nowadays, there would have been a lawsuit. Back then though, Bud just put it on a shelf in the back and brought it out now and then to show customers. Video games were pretty much non-existent except for in the arcades and that was mostly pinball. A friend of ours though got the game “Pong” and we played it at our house one night. I remember how hard we thought it was to hit that little puck – even though it was soooooo slow. We didn’t have cell phones of course back then. Our phone was a rotary hanging on the wall and we had a party line. Whenever we wanted to use the phone, we had to listen first to see if our neighbors were using their  phone. It was a bit annoying at times. We cooked our meals on the stove or in the oven – from scratch. Watermelons still had seeds – and corn was not as sweet as it is today. Kids didn’t use backpacks – they just carried their books. No ipods or cd players – it was a radio or a record player. For fun we would use one of those box-style tape recorders and make up news reports while interviewing our friends – and then we would laugh hysterically when we played it back a minute later. I think we were entertained much more easily back then. We could play a board game, draw, read books or throw a ball outside. My kids complain about being bored at times even though there are over 100 TV channels, video games, a computer, texting, etc… And that is when I turn to them and say, “When I was a kid….”

21 Jul This entry was published on July 21, 2013 at 11:28 pm. It’s filed under Uncategorized and tagged child, childhood, cockroach, kid, oregon, past, pong, seventies, soda, strawberry, toys, tv. Bookmark the permalink. Follow any comments here with the RSS feed for this post.