Be a Kid! Have Some Fun! 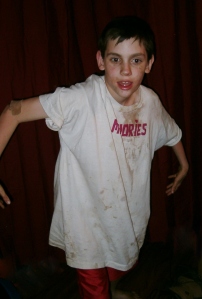 One day into Summer vacation and this is how my son looks. He was playing at the neighbor’s house – looking for bugs, wrestling in the dirt, riding on four wheelers and having grass fights. Just like I want him to. My kids have never been the clean ones. They go through their shoes quickly – running, jumping, climbing trees, using them as brakes while riding bikes, and bounding into puddles do that. They end up with holes in their jeans, stains on their shirts and bandaids on their elbows. And for the most part, I don’t care. I want them to be kids! Sure they love to play video games and watch tv, but being outdoors is important to them. My youngest is especially fond of the outdoors. When he was fussy as a baby, we would take him outside on the porch and he would immediately calm down. Today he spends most of his time outside – and he always tells me when he is going out so I don’t have to wonder where he is. Of course, there are times of playing inside as well – couch cushion forts, lining up all the old VHS tapes to use as a road for toy cars – even playing ball. We often laugh about playing ball inside because of an old Brady Bunch episode where Peter breaks a lamp when a basketball goes astray – and Bobby says, “Mom always says – Don’t play ball in the house!” Well, this  mom does allow ball in the house – and often participates. Of course it depends on the ball – only light-weight balls that won’t do much damage to furniture, dogs or people. We have even played badminton in the house – yes, my idea. For Christmas I got Jake a HUGE beach ball and we all had so much fun tossing it, hitting it and kicking it to each other. I dated a guy once who did not allow his kids to play ball in the house or jump into puddles – that didn’t last long. He thought I was too lenient with my kids – I thought he was too uptight. So we parted ways. That’s okay. I want to be the parent I want to be – and not be swayed by others who disagree with my style. I want my kids to be kids – and enjoy life to the fullest while they can – before responsibilities take over and put a damper on things. I remember how much fun it was when I was a kid – making rivers with garden hoses, playing on the tire swing, eating green apples before they were ripe, making a tipi out of broom handles and blankets – the joy of being free was amazing! I wish I could go there again. I know that I can’t go back in time – but when I watch my kids playing without a care, it brings joy to my heart, knowing that they too feel what I felt and how meaningful it will be when they get older. I think that is what being a good parent is all about – allowing your child to be young and have fun – even if they get all dirty. Afterall, dirty kids and clothes are only temporary. Stifling your kids by not allowing them to be free in thought and creative play lasts a lifetime. Go on! Let them be a kid and have some fun! When they are older, they will have wonderful memories of their childhood – and provide them with a good foundation for being a parent. That is worth every worn out shoe and hole dug in the backyard, don’t you think?

09 Jun This entry was published on June 9, 2013 at 4:26 pm. It’s filed under Uncategorized and tagged ball, child, childhood, children, clean, dirty, free, freedom, kid, kids, life to the fullest, outdoors, outside, play, playing, shoe. Bookmark the permalink. Follow any comments here with the RSS feed for this post.

Older: Hello, this is the hospital calling…
Newer: Who’s That Guy?